Get fresh music recommendations delivered to your inbox every Friday.

Friends of Mine - Signed CD 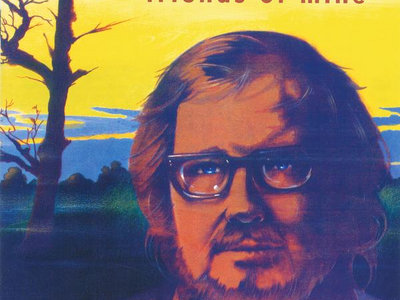 “This is truly remarkable. The development of his music since his debut is nothing short of miraculous. This is not to say I never expected him to come up with a gem like this -I did. But not so soon. And it is the rate of development that is hard to believe. If you think I am laying it on too thick, just listen to the album. That will convince you.

“Harvey has a rare ability to write songs which are not only enjoyable musically, but also contain brilliant lyrics. Read the lyric sheet, you’ll realise what a great writing gift he has.”
New Musical Express

“He has ways of saying things that most of us feel but few are able to explain. He is basic and straightforward, easy to explicate in that sense, but there are lyrics that capture an intangible magic. It’s an album that everyone should hear.”
Sounds

“A very nice album from a man who has been writing consistently good songs for far longer than people realise. All the lyrics… are good reading in their own right. It seems as if good songs with words and music are not too hip at the moment..but give it a listen.”
Beat Instrumental

“Avoiding the maudlin clichés of many of his contemporaries he produces an album of many musical delights and lyrical suprises. Andrews has a genuine love and appreciation of words, which he uses as skillfully as anyone currently writing.”
Music Week

“Harvey Andrews’ voice is a remarkable instrument. It is capable of registering emotion and tension to a near-unbearable degree. His recent association with Graham Cooper has considerably broadened his scope without in any way weakening his own personal vision and impact. This is a really superb record.”
Folk Review

“Andrews and Cooper are completely original… as is this beautiful record.”
Melody Maker

“If there was any justice in the music jungle he’d be up there with Elton John and Cat Stevens as one of Britains finest, but somehow, I feel that Harvey is one of those talents who is just too good for the masses. Do yourself a favour and invest in this little gem.”
Medway Times

“The voice that comes through the speakers is a major shock-because it is absolutely one of the best pop voices in the music’s history. Harvey Andrews manages a triumphant amalgam of Neil Sedaka thru Rick Nelson, thru Gene Pitney, thru Roy Orbison, thru Elton John – yet soars through his songs with a final compound of these others that is, despite them, new and fresh and self-assertive. To listen, the first time, to so totally unexpected a talent is as exciting as it must have been to hear the comparably liquid, dynamic voice of Jackie Wilson on “Reet Petite” for the first time in 1956.

“If ‘Friends of Mine’ were an American record, it would be important and impressive; for a British album it is a stunning achievement and a breakthrough.”
Let it Rock Magazine

ships out within 28 days